People play online casino games for a variety of reasons.

For some, it's a fun way to pass the time.

A fair proportion, meanwhile, like to immerse themselves in certain themes like outer space or Ancient Egypt. Call it a bout of escapism, if you will.

Then there's the old-school crowd yearning for a slice of bygone-era Vegas whose prayers are answered via a retro 3-reeler sporting classic slot motifs.

The Draw of the Jackpot

Another category altogether are lured by the tantalising prospect of scoring a life-changing jackpot prize at the reels.

Caxino Casino is home to scores of players belonging to the latter category. And it's really not hard to see why.

Jackpot slots regularly dish out prizes reaching into stratospheric territory. Indeed, it's not uncommon to witness players turning small change into five and six-figure sums within a matter of seconds.

One player based in Finland managed to do just that last month spinning an ice-cold game from Evolution-owned Red Tiger Gaming. 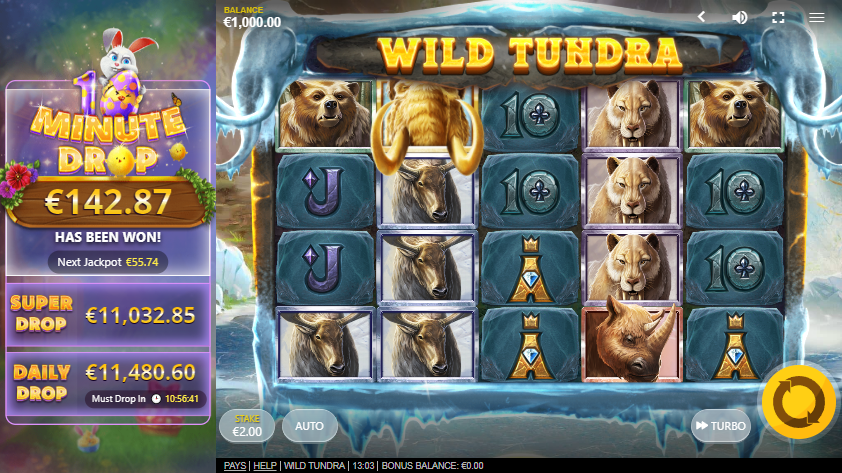 Set in the sub-zero climes of a far-off tundra where woolly mammoths and sabre-tooth tigers have been brought back to life, Wild Tundra promises to "take players down the snowy path of winners" - as well as back in time.

The game has been configured using a 5x4, 1,024 ways to win setup while packing in a quintet of features - namely Free Spins, Super Symbols growing up to 1x4 in size, along with Cascading Reels, and increasing Multipliers.

Another highlight is the slot's considerable 10,484x max win, but this was obliterated on March 20th as the fortuitous Finn booked in some time with our long-lost tundra inhabitants.

A meagre €0,10 bet was all it took for the player to trigger Red Tiger's Daily Drop Jackpot - to the tune of €16,341. Crunching the numbers, the windfall represents an eye-popping 163,414x win in Multiplier terms - bettering the game's own top payout more than 10x over!

It also happens to be the largest Multiplier win we've ever seen at Caxino since opening for business over two years ago - and by some distance.

Red Tiger Gaming offer all online casino operators the option to integrate jackpots into any game from by the provider. They're a sure-fire means of enhancing the overall playing experience while dangling an irresistibly large carrot in front of players.

Caxino's game lobby is a haven for those who enjoy playing top-notch Red Tiger-powered titles headlined by lucrative jackpot prizes. There are three different types of jackpots in the mix, each offering mouth-watering sums of cash.

The granddaddy of them all, Progressive Jackpots frequently hog the headlines with the prospect of truly life-changing money in the offing. These jackpots build up gradually over time as players contribute to a communal purse, with a small portion collected from every single wager placed.

Once triggered, a Progressive Jackpot resets back down to its respective 'seed', or floor amount, and the jackpot-hunting kicks off all over again.

Overnight millionaires often have Progressive Jackpots to thank for their sudden turn in fortunes, and they remain arguably the biggest draw of all.

Ceiling Jackpots apply a fresh twist on the progressive concept. These top prizes are guaranteed to pay out before a pre-defined value is met. Watch as players scramble to enter the draw as the jackpot prize draws tantalisingly nearer!

Last but not least, Red Tiger are the brains behind industry-first Daily Jackpots. Similar to their Ceiling counterpart, Daily Jackpots must drop before a certain time each day.

Fancy entering the winners' enclosure yourself? Search all games from our celebrated partner in the Caxino game lobby and get ready to see your name up in lights!